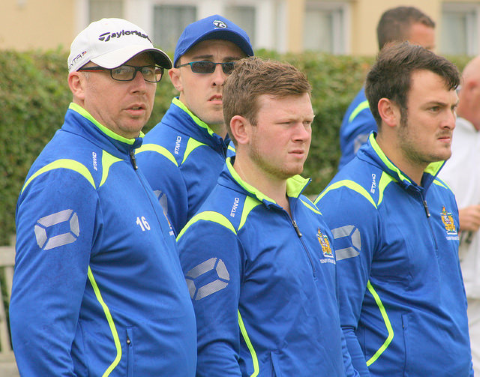 The Giltar Hotel Sponsored Tenby BC played their latest game in the 2015 Welsh Club Championship last Saturday. Tenby have not lost in the quarter finals since 2008, losing by 15 to Penhill BC of Cardiff  in 2008 and prior to that Morriston Utd of Swansea in 1996.  Tenby have not lost a home match in the Carruthers Shield since their one shot defeat at the hands of Llanelli in 2002 (source:  Peter Day). Both sides have been successful in the competition, commonly known as the Carruthers Shield and had high hopes of success in this years competition leading into Saturdays fixture.

Rink 1:  The successful international pairing of Kieran Peregrine and John Roberts teamed up with their reliable front end of lead and under 25 International Luke Rees and former Captain Jon Webb.  They played against Current Indoor International Martin Clarke, who had former Welsh Triples Champion, Kristian Harris as his third, under 21 academy player, Gwynfor Parr as second and the vastly experienced Jack Belland as lead.  A great start for Pegs saw them take a count of ‘4’ on the first end.  The rink consolidated by taking a single on the next end before Barry Athletic hit back with a count of four of their own.  A run of three winning ends for Tenby (2, 2, 2) saw their lead increase to 11-4 but then another dropped count of four shots saw the gap narrow to three.  A count of three for Tenby followed by a single saw the gap restore to seven shots.  A single shot for Barry and then a double for Tenby saw the lead increase to eight, before Barry again scored a single.  Pegs and his rink were playing to a very high standard and took another count of four shots to lead by eleven (21-10).  Barry Athletic to their credit rallied tremendously and scored on the next seven ends, albeit all singles and doubles to reduce the lead to a mere two shots (21-19). A count of three shots to the Tenby rink saw them win 24-19.

Rink 2:  Another International back end combination for Tenby in Paul Diment and Ryan Thomas combined with the excellent Tenby team captain, Joe Richards and junior international trialist, Cameron White, saw them play the legendary Nigel Leigh former Carruthers Shield Winner with both Cardiff (Sofia Gardens) and Dinas Powis in addition to multiple Welsh National champion indoors and a former Welsh outdoor international as well as being Captain for Wales indoor.  That was the task that faced Diment – in fact in 2000, Nigel and Paul were both British Isles Rinks Champions – Nigel with the indoor discipline with Jonathan Forey, Richard Morgan and Jeff Webley and Paul with the outdoor version together with Peter Day, Andrew Muskett and Pat Currie. Paul got off to a great start with a superb trail shot to make a count of two shots which were followed up with two more doubles and a single to lead 7-0.  Paul was aware that it would not take Nigel long to ‘work out’ the rink and so it proved to be.  Nigel drew shot to make it 7-1 and then a change of mat and jack length saw the Barry rink score on the next four ends to tie things up 7-7. A double for Diment saw the lead regained but with the Barry rink starting to show signs of confidence, the Tenby skip knew that the tide had turned.  The Barry Athletic ‘third’ started to play some truly outstanding bowls which set up the platform for the talented Nigel Leigh. A winning sequence of five consecutive ends for Nigel and his rink which included two counts of three shots and a five in addition to two single shots saw them grasp the initiative from Diment and take an eleven shot lead (11-20).  The Barry team grew in stature across the green with the events that were unfolding on rink 2 and momentum started to swing across the green.  However, Diment is an experienced competitor and had to call upon all his knowledge in ensuring that what was happening on his rink did not lose the match overall for Tenby. Out of the last five ends, Diment won four by very careful and cautious tactics to restrict the high flying Barry Athletic rink.  The last five ends were a two and a single for Tenby, a single for Barry and then two doubles for Tenby. The last end was not played as the game was won overall, and the final score of 16-22 for Barry Athletic.

Rink 3:  Another International back end combination for Lee Williamson and Andrew Muskett teamed up with Welsh and British Isles rinks champion and triples finalist with Malcolm Brace and Ian Badham.  The lead for this rink was double under 18’s Welsh national pairs winner (with Cameron White) and Elite under 18 player, Aaron Lloyd.  They competed against former under 25 international , David Wright, son of former international, Jeff Wright. David Wright played some very ‘big’ bowls in this game, none so much than in the opening exchanges when he limited the Tenby rink. After 5 ends the score was 4-4.  Then a dropped count for Williamson four followed by a double saw the Barry rink take a six shot lead (4-10).  Williamson rallied with a three and a single only to drop a double before taking two counts of four shots to take the lead 16-12. A single for the David Wright rink reduced the deficit but then this talented rink upped their game again to take a single and then a count of five shots, just as Diment was conceding his count of five shots.  Back though came David with a double and then after Lee had taken a single, David took a count of four (23-19).  Williamson then took another single before David took a double.  With the Williamson rink sitting pretty on the last end, another great bowl by David Wright made a count but Williamson played a great bowl under pressure to narrowly miss making shot but did get second shot to concede just the single. The rink won 24-22.

Rink 5:  The final rink and the final back end international combination of Craig and Luke Guymer who teamed up with International Chris Court and former Welsh rinks champion Mike Jackson. They played against another formidable opponent in former Welsh International and three time Welsh champion Glyn Thomas. A count of four on the first end followed by double and a treble but the Tenby rink into a quite 9-0 lead. A single for Barry followed by a two, three, two for Tenby extended the lead to 16-1.  Barry Ath responded with a two and a one only for that to be cancelled out with a two and a one for Tenby.  Glyn and his rink did rally, as would be expected from such a talented player to score on the next five ends (1, 1, 2, 1 and 1). The score at end sixteen was 19-10 to Tenby. The Tenby four rallied superbly with all player having excellent games, but top place has to go to Chris Court who was superb. Winning all remaining five ends helped Tenby fight off the Barry fight back with consistent scoring of 2, 1, 1, 2,  and 1 to win 26-10.

In conclusion, a great game played in tremendous spirit. Barry Athletic were a credit to their club and gave Tenby the fright of their lives and the momentum was with them in the closing stages. Barry Athletic also had two skips missing with the World Championship player, Robert Horgan missing and Dean Rees. However, Barry Athletic in my opinion did not miss those two players and all of their team can be extremely proud of their performances. After the game I said that I would be delighted to see Barry Athletic win the Carruthers Shield as I have many friends at the club – especially Russell Evans, whose father won the famous Tenby Gold Cup. Russell has recently had a heart by-pass operation and the Tenby Club’s best wishes go to him on a speedy recovery. Tenby face RTB Ebbw Vale who overcame the challenge of Swansea side, Old Landorians – both former winners of the Carruthers Shield. This will be the third time that the two sides have meet in the semi-finals – previous occasions when Ebbw Vale won were in 2013 and 2014 on their way to the title.  The Ebbw Vale side are very talented and also a very sportsman like side who contain players who play the game in the right spirit.  This is the best team that Tenby have ever seen represent them in the Carruthers Shield but Ebbw Vale are equally a good side and without a doubt will be favourites against a developing Tenby team and it will be a very interesting contest between two talented sides.