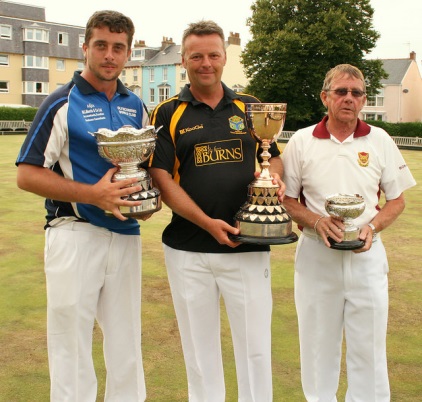 It's six of the best for golden Dai, but 'awesome' Jonathan goes close to coveted Open Week double. As we went to press last week, we reported that four players still had dreams of achieving the coveted 'double' at Tenby Bowling Club's 90th prestigious Open Week tournament. They were Welsh international and reigning British Isles singles champion Dai Kingdon, of Kidwelly, inter-national John Roberts, of the host club, David Weak (a name synonymous with Welsh bowls), of Presteigne... and Glyncorrwg's Jonathan Williams. As Friday morning dawned for finals day, though, only one of those players still held those aspirations of lifting both the magnificent Gold and Silver trophies, as one by one the other three had fallen by the wayside. And perhaps a little surprisingly. considering the elite company he was in, that was the man from Glyncorrwg, Jon Williams, who enjoyed a remarkable week on the Sutton Street green. In fact, indefatigable tournament organiser Lynne Delabertouche Rafferty later described his performance as 'awesome'. But still the question on everyone's lips on Friday was, `Could he go on and achieve that coveted double?' The answer following the Silver Bowl final was 'yes perhaps he could', as he again produced an impressive performance to defeat Tenby's own Dai Spencer. who himself had a week to remember. Dai, still the only player to captain Tenby to Carruthers Shield glory - and that was some five years ago - now 'plies his trade' with the club's second string, the Five Arches. but he rolled back the years with a series of superb dis-plays and victories. One of those was in the morning's semi-final when he cruised through against Josh Jones 21-9. while Williams came through a tough encounter with another tournament favourite, Paul Diment, of Tenby. 21-18. And the man from Glyncorrwg maintained that form in the final, producing some excellent bowls through-out to claim the trophy with a comfortable 21-6 victory - an early birthday present for him, as he turned 25 this week. One down, one to go! Was the Gold also within his grasp? If he was to lift it later that afternoon, he would have to overcome one of the tournament's legends, Dai Kingdom to do so - no simple task, as many before him could no doubt testify. Kingdon, who plays for the Kidwelly club, was bidding for a remarkable sixth success in the blue riband event having won Gold no fewer than five times before - the last time 11 years ago in 2003. On his way to the final, Kingdon (also Silver Bowl holder before Friday) had accounted for, among others, former Gold Cup winner, Steve Reese, of Whitland, Tenby's John Roberts. himself a past Silver Bowl winner, in the quarter-final, and Ashley Williams, conqueror of David Weale, in the semi-final. So, as already mentioned, no easy task for the newly-crowned Silver Bowl holder. And so it was to prove. Although buoyed by his earlier success, Williams found it a 'bridge too far' as Kingdon again showed all his silky skills and experience to march to glory with a 21-14 victory. Fittingly, it brought the curtain down on another memorable week at the ever-popular Tenby tournament, which was again generously sponsored by Molson Coors Brewing Ltd. to the tune of £2,330 in prize money, for which the club is truly grateful.