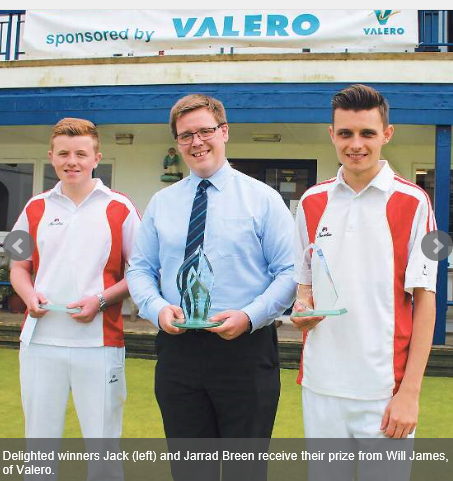 Last month, talented teenage bowler Jack Breen, of Gilfach Goch, made history when he became the youngest ever winner of the prestigious Gold Cup at the annual Tenby Open Week tournament. Last weekend, he was back in the town with his brother Jarrad, attempting to complete a memorable Tenby ‘double’ by adding the Valero Pairs title to his growing list of achievements. The popular two-day event once again attracted a strong field of bowlers from across the country, including several past and present internationals, junior internationals, the current Welsh singles champion... and that ‘man’ Breen! Unfortunately, although the talent on display was among the best you could wish to see on a bowling green in Wales, the same could not be said for this summer’s fickle weather... on the Saturday at least.

Rain, sometimes torrential, driven by near gale force winds, made life distinctly unpleasant on the Sutton Street turf - not that that worried these hardy bowlers too much, though, as they simply (bravely) zipped up their ‘wets’ and got down to the business of enjoying another well-run Tenby tournament.Having said that, the conditions did cause one or two headaches for tireless organiser Lynn Rafferty, as a late downpour on Saturday proved even too much for the squeegee mops to cope with.With much of the green finally flooded, it meant a hasty rescheduling of matches and an earlier than expected start for some unsuspecting players on Sunday morning, who were perhaps looking forward to an extended lie-in!

Fortunately, though, by then the weather had improved considerably and by lunchtime, everything was back on track, with the four groups of 10, who had played on a round-robin basis, being whittled down to eight pairs (winners and runners-up from each) for the quarter-finals. Among them were three home club pairs, Ryan Thomas and Luke Guymer, John Roberts and Mike Jackson and Paul Diment and Liam Price, and yes, you’ve guessed it, Jack Breen was still there with brother Jarrad.

The first two Tenby pairs met head-to-head and Thomas and Guymer must have been fancying their chances of tournament success after sealing the fate of Roberts and Jackson with a surprisingly comfortable 12-3 victory.Diment and Price also progressed after a squeezing through by the odd shot 5-4 against Ashley Williams and Anthony Pritchard, setting up a mouth-watering clash with the Breen brothers, who disposed of Josh Hancock and and John Morgans 6-2. Jordan Driscoll and Jake Hancock were the remaining semi-finalists after accounting for Morgan and Tom Holmes 6-1, but they couldn’t stop Thomas and Guymer marching on to the final.

It was a similar story in the other semi, where hopes of an all-Tenby finalé to the competition were finally laid to rest by Jack and Jarrad Breen, who enjoyed a 7-2 victory over the home pair.And so the scene was set for the eagerly-awaited final. And what a thriller it turned out to be, with nothing separating the pairs as they were locked together at 7-7 after the mandatory eight ends. It meant an extra end, a sudden death decider, with perhaps Jack drawing on his experiences in another golden nail-biter four weeks earlier, as he and brother Jarrad snatched the all-important shot to seal a dramatic victory... a fitting end to another successful tournament, with the club expressing thanks to Valero for continuing their sponsorship of the event.

Results in the knockout stages were as follows:

Final: Ryan Thomas and Luke Guymer 7 Jack and Jarrad Breen 8 (after an extra end decider, the score being tied at seven-all after eight ends). 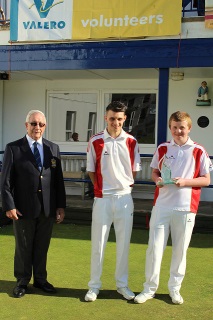 The annual Valero Pairs open tournament was played, at the Tenby green last weekend in what was, for the most part, glorious sunshine.  The popular two-day event attracted 40 entries (80 players), who were split into four groups of 10 to initially play on a robin-robin basis in games of six ends each. Come Sunday afternoon, the winners and runners-up of the four groups then went through to play in the quarter-final knockout stages, and perhaps not surprisingly, these featured some familiar names. Among them were a couple of pairs from the host club as well as this year's Silver Bowl winner, David Kingdon, the defending Valero champion with his partner Joshua Jones, and another finalist from Open Week, Jack Breen with his brother Jarrad. And it was the two youngsters from Gilfach Goch, who eventually ran out winners of the prestigious tournament. After disposing of fancied Tenby pair John Roberts and Mike Jackson in a hard fought semi-final, the final against Morgan and Tom Holmes, of Kidwelly, proved another tight affair, before they eventually got the upper hand to clinch the trophy with a 10-1 winning margin.

Afterwards, organiser Lynne Delabertouche Rafferty said it had been another superb weekend, both on and off the green, and she also thanked sponsors Valero for their generosity in providing a total of £600 in prize money. The trophy and prizes were presented by club chairman, Fred Broomhead. 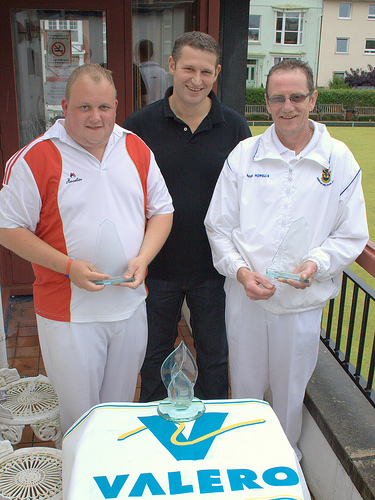 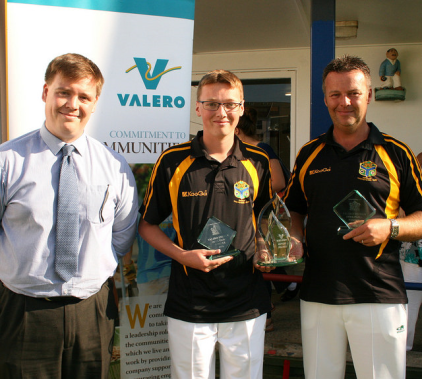 The annual Valero Pairs open tournament was played at the Tenby green last week-end in glorious sunshine. The popular two-day event attracted 40 entries (80 players), who were split into four groups of 10 to initially play on a robin-robin basis in games of six ends each Come Sunday afternoon, the winners and runners-up of the four groups then went through to play in the knockout stages, and perhaps not surprisingly, these featured some well-known names, including both this year's Gold Cup and Silver Bowl winners, David Kingdon and Jon Williams. while the host club's only remaining representatives were Aaron Lloyd and successful Tenby team captain Joe Richards. Quarter-finals (six ends); Keith Evans and Mike Morgan 2 Mark Howells and Jon Williams 9; Ashley Williams and Huw John 9 Danny Price and Roy Launchbury 2; Mark Davies and Matthew James 5 Neil Harris and Keith Williams 4; Joshua Jones and David Kingdon 5 Aaron Lloyd and Joe Richards 4 (following a sudden death end after the pairs had tied 4-4). Semi-finals (eight ends): Mark Howells and Jon Williams 5 Ashley Williams and Huw John 8; Mark Davies and Matthew James 5 Joshua Jones and David Kingdon 11. Final (10 ends): Ashley Williams and Huw John 7 Joshua Jones and David Kingdon 15. Prizes were kindly presented by William James, of Valero, with the Tenby club being grateful to Valero for their valued and continued sponsor-ship of this annual tournament. 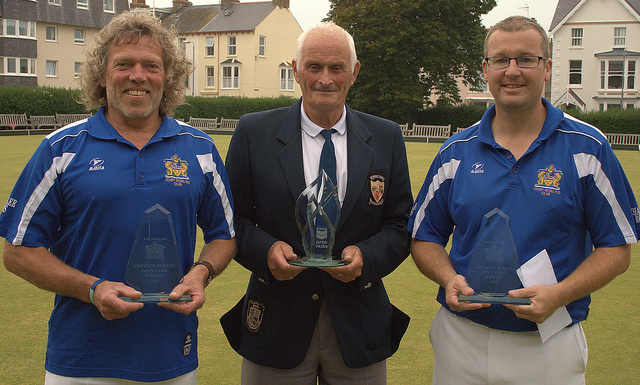