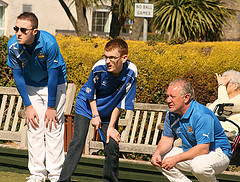 Tenby Arches Ladies played host to Rhiwbina  Ladies last Sunday. The Rhiwbina ladies had been touring Pembrokeshire and were playing their last game at Tenby before heading back to Cardiff. The Tenby ladies lost the game by 57 shots to 73, but the score really did not matter, friendships were formed and it was the game of bowls where young and “not so old' can compete equally that was the winner. A great time was had by all and a special thank you goes out from captain Carol to Katie Dickinson and Lillian Howells.

On Sunday, Fairoak Bowling Club from Roath Park, Cardiff, visited Tenby Bowling Club on a day trip to the seaside. Again the game was played in wonderful sunshine and great spirit. The green was looking good and pace was very quick. The Fairoak players were very impressed with our green and facilities, taking a couple of ends to adjust to pace of the surface. Whenever possible, the Tenby skips tested Fairoak players by varying the length of the jack, long to short, not giving them time to settle. Again after 10 ends refreshments were taken, with tea and biscuits inside the pavilion (thanks to all helpers). After tea, the final 11 ends saw Tenby Bowling Club press home the advantage of the ever-quickening green to run out winners 135 to 108.

Tenby Bowling Club recently welcomed Melyn United to t heir Sutton Street green for a friendly match (writes club captain Peter Hooper)  Hailing from the Neath area, they were on a day trip to Tenby as part of their centenary ( 100 years) celebrations. How smart they looked wearing their greys and blazers and special centenary ties . This was a tough ﬁxture for Tenby as seven mixed rinks were required and, due to other bowling commitments around the county. we were short on numbers. so we invited three players to guest for us, two from Pendine and one from Saundersfoot - many thanks from Tenby Club for your support.

The game was played in wonderful sunshine and very high spirits. After 10 ends, the score in Tenby’s favour stood at 77 shots to 54. Fifty-six players then made their way into the pavilion for customary refreshments of tea and biscuits and a special treat- cake, yum. yum. Despite the confusion of so many players descending upon our tea ladies all at once, they did a wonderful job of looking after us – no pressure girls. Many thanks to you all (we would be lost without you).  Back onto the green for the ﬁnal 11 ends, which l think took longer than the ﬁrst half, probably due to the heat of the sunshine taking its toll... or. More likely, too much cake being eaten at tea-break! A wonderful afternoon  was enjoyed by everyone on the green, as was the social gathering in the lounge bar afterwards (and for those who were there, you will no doubt be relieved to hear that the Melyn captain has found his glasses!). You might also be interested to know that. as well as it being a special occasion for the centenary celebrating Melyn United team , it was also a very special day for Tenby Bowling Club, as it is believed a little piece of history was made on the day.

As club captain, l was very honoured to have at number two in my rink, the youngest member to play in a Tenby club game, namely nine-year-old Katie Dickinson. Katie played the full 23 ends (including trial ends) and her enthusiasm, dedication and keenness never faltered throughout. Many congratulations on your performance. Bowlers, watch this space -as in Katie Dickinson, a star is born!

Rink scores (Tenby and guests first, visitors skips only) were as follows:

On Wednesday, May 14, West Sussex were visitors to the Tenby green. Staying at the Clarence House Hotel, travel distance for them could not have been shorter! This was their fourth out of a six-match tour and, arriving at the Tenby green undefeated, they were in confident mood to make it four out of four. The game was played in wonderful sunshine and high spirits, as were all the games on their tour. After 10 ends, tea and biscuits were enjoyed in the pavilion with the score at the time 53-42 in favour of West Sussex, so we plied their players with extra Jammie Dodgers! Those extra biscuits made a difference, with Tenby pulling back the score to eventually run out winners 108-99. Well done Tenby Bowling Club. Many thanks to all who helped make the afternoon so successful. Special thanks to Pendine Bowling Club who supplied Tenby Bowling Club with one rink of players.