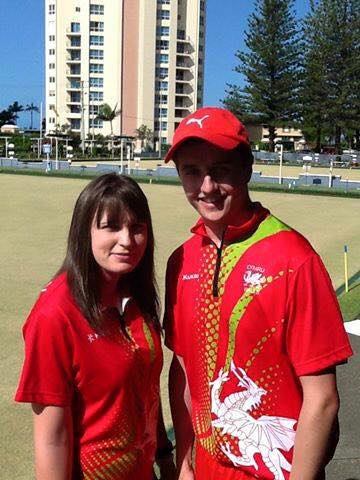 Tenby Bowling Club member Ysie White is pictured at the opening ceremony of the World Junior Championships at Broadbeach Bowling Club on Australia's Gold Coast. Ysie and fellow Welsh competitor, Ross Owen, of Harlequins BC, have made bold bids in the opening rounds of both the ladies and men's singles and mixed pairs events. Countries competing include Hong Kong, New Zealand, Japan, Malaysia, Namibia, Scotland, Ireland and Canada and the hosts , Australia. 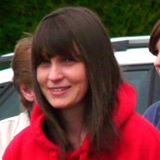 Finally, congratulations to the club's Ysie White, who again won the Welsh Under 25 singles title last weekend, defeating Jess Sims, of Llandrindod Wells, in the final. Ysie also narrowly missed out on another double, finishing as runner-up in the junior two-wood pairs with Sara Marie Nichols, of Llandeilo, a competition which they won together last year.

Tenby Arches Ladies travelled to Saundersfoot last Tuesday for an evening fixture with the league leaders who had already beaten them on their home green earlier in the season. It was decided to play this game over 18 ends and finished with Saundersfoot ladies winning by 43 shots to 23 and collecting all six points to secure their pole position in the league. Arches skip Lon was supported by Liz. Meryl and Carol and were against a strong Saundersfoot rink skipped by Marion Evans. The Tenby ladies did not get onto the score sheet until the eighth end and were then 10 shots down. They managed to pick up another 10 shots from three ends, but were well-beaten by 24 shots to 12. Alison skipped the second Arches rink. with Margaret. Audrey and Mair in support. This was a tighter game and at 11 ends the game was tied nine-all. The Saundersfoot rink, skipped by Ceris Hewlings, then found some good form, picking up nine shots in the remaining seven ends to win by 18 shots to 11.

Youth to the fore in ladies' county bowls finals

Welsh junior internationals Ysie White and Gemma Amos have swept the board at the West Wales Ladies Bowling Association finals. Anyone who thinks bowls is for retired people would have certainly had their eyes opened at the two-day event held at Neyland Bowls Club, home of this year's president. Margaret Sanders. Ysie, a member of Tenby Bowling Club, won both the two and four-wood singles, two days before her 21st birth-day, while Gemma, 22, who bowls for Saundersfoot, chalked up success in all four finals she reached. Ysie was crowned four-wood singles champ after a hard-fought contest with three times winner Saundersfoot's Ceris Hewlings, while in the two-wood singles. she beat immediate past county president Cally Jones, of Whitland.

Gemma and her mum Steph made history when they became the first mother and daughter to win both the two and four-wood pairs competitions. In the two-wood pairs they beat Mary Codd and Win Howells. of Haverfordwest, while in the four-wood pairs they overcame Sara John-Davies, who was making her first finals day appearance, and county secretary Ann Thomas, also of Haverfordwest. Gemma and Ceris teamed up with club mate Marion Evans to lift the triples title against Margaret Lewis, Anne Rosin-Dann and Ann Thomas, of Haverfordwest, while Steph joined the winning trio to clinch the rinks after a nip-and-tuck game with Moira Chadd, Anne Wilks, Margaret Caley and Penny Brickle, of Pembroke Dock.

With the disappointment of their last game defeat behind them, the Tenby Arches ladies travelled to Haverfordwest on Saturday hoping for a win to boost their confidence. They certainly did this, beating both Haverfordwest Tasker rinks and picking up the maximum six points. Helen and her rink of Meryl, Audrey and Gerry were in fine form, winning by 27 shots to 17 and were never behind in the game. Alison. minus her Aussie hat on this occasion, was supported by Liz, Ginnie and Mair. Like Helen, on the rink along-side her, the girls were never behind, running out comfort-able winners by 27 shots to 14, This was a great confidence boosting win, to get maximum points and to win by 54 shots to 37 at Haverfordwest must go down as one of the best performances of the season?