WELSH SUCCESS FOR AARON AND CAMERON 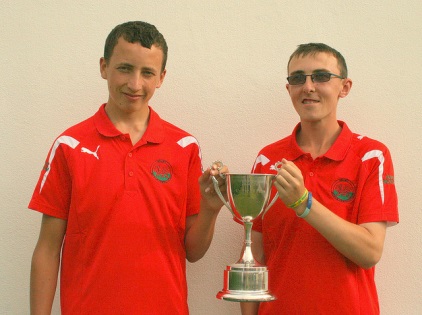 Pictured are Tenby Bowling Club youngsters Aaron Lloyd (left) and Cameron White who won the Welsh Under 18s two-wood pairs title for Pembrokeshire earlier this month. It was the second time they had lifted the trophy, having also won the competition in 2012.

Following their success in the County Finals recently, several of the Tenby members have been representing Pembrokeshire in the National Finals at Llandrindod Wells this week. Unfortunately, most fell at the first hurdle against stiff opposition, with the only ones progressing through the first round being pairs representatives. John Roberts and Mike Jackson, who themselves went out in the quarter-finals. Incidentally, though, members might be interested to know that one man who has continued in a rich vein of form at the finals following his success at the Tenby club's Open Week, is Glyncorrwg’s Jonathan Williams, who has reached the final of the Under 25s competition.

Tenby continued their Carruthers Shield quest with another narrow victory on Saturday. Journeying to Six Bells Bowling Club at Abertillery, they found themselves over 20 shots behind at the halfway mark, but rallied in the second part of the match to eventually sneak home by three (73-70) -one less than in their previous encounter against St. Josephs of Cardiff. They now have another difficult task on their hands when they again travel into the Valleys next week to take on Blaenrhondda in the third round of the competition, their opponents having accounted for another Pembrokeshire side, Haverfordwest, in the last round.

The N. D. Toy & Partners Ltd. sponsored Tenby team returned to action in the league a week last Wednesday, hosting Whitland.  Some tinkering by the Tenby selection duo saw some changes of not only personnel, but of positions.  After having questions relayed to him by the media in the pre-match conference, captain Joe Richards explained that he was still unsure what his best team is in relation to the Carruthers Shield (Champions League). Therefore, there were opportunities for others to stake their claim in the 'European Squad.)

Rink one: New transfer signing Ryan Thomas, who has moved from Haverfordwest. has settled in well and was once again entrusted with a skips' berth,  He was ably supported by Jon Webb, who is entering his testimonial year fur the Tenby club after 27 years’ service.  Ben Simmons and Joe Richards made up the front end partnership.  With an early score on the first end (5), followed by a number of 2s,  the home side took control and at half-time led 13-7 against the Whitland rink led by captain Glyndwr Thomas.  At 15 ends, the gap was narrowed to 15-12 and all of a sudden things did not look so good.  John Baggott raced down from the directors' box to sort things out in typical Mourinho style and soon got things back on track - the rink winning five out of the last six ends to finish 21-15 up.  Rink two: Andrew Muskett  skipped against Cohn Wynn and had a comfortable night. apart from one end when his defending left a lot to be desired, hooking two clearances, to drop a count of four. Extra technical training by personal coach Gareth Humphreys has been requested.
However, with Chris Thomas, another transfer acquisition for an undisclosed fee from Llanelli having another great game, the Tenby four were always in control. This was emphasised by them winning seven out of the last eight ends, 14-1. The final score 25-12.

Rink three: The Guymers returned from pre-season a little late, but after accepting a club record fine were quick to show that the extra rest was well worth the wait, with both having great performances.  Huw Nicholas, a free transfer from Whitland due to the Bosman ruling, had another very good game and is making his claim for a place in the Champions League team. With Paul making what is becoming a rare appearance in his twilight years, the Tenby four were always in control.  Such was their superiority the maximum 'count' they dropped was a single - well, there was one count of a two dropped, but I claim poetic licence! In the end, despite good performances from John Rees and Liam Price for Whitland, it was a win for Tenby 31-8.  Rink 4: Steve Reese, who as a former Gold Cup winner, has never taken up the option of joining the Tenby club, despite a special buy-out clause in his contract , had a great game, skipping Whitland's only winning rink, Steve was up against Tenby's record signing from Ammanford, Kieran Peregrine.  As well as Steve, it must be said that his rink all played very well and secured a very good victory in light of the Tenby rink featuring three Welsh internationals - but the bigger they are and all that. However, an excellent performance by Kieran kept the game much closer than it could have been. Once again a very good performance against one of the main rivals for Tenby's championship crown. What is becoming more of a habit is that Tenby have constantly held a slender lead at the halfway mark, only to power away from their opponents during the second half of the match. Joe Richards is claiming credit for this as he recalled all the players early for extra pre-season training and their fitness levels are certainly showing.

The games come thick and fast this time of year which leaves the N. D. Toy & Partners Ltd sponsored Tenby team little chance for recovery between games. This can cause injuries and a few have recently been picked up.  However, Tenby have a strong squad this year after some good transfer deals completed by Peter Day in the Tenby bar during the Valero Tournament last season. This season, thus far, has seen very high performance levels from individuals due to competition for places and players becoming worried about their places as the new manager (Joe Richards) was keen to emphasise that past loyalties and past accomplishments meant nothing (shrewd move by Paul Diment to volunteer to be assistant manager then!).  Some more changes by the management team for the game against Milford Haven - both the manager and the assistant manager were in fact missing for the game. Paul was scouting potential Champions League opponents, while Joe was attending a Champions League meeting in Brussels.  However, Andrew Muskett came out of management retirement to help out - another shrewd move me thinks! Anyway, back to the action.

Rink one: The Guymers played their first third/skip partnership and along with Alan Whitehouse and the returning Ben Sheldon (knee injury) saw off the challenge of Jim Thomas 23-13.  Rink two: Pegs came back to winning ways, beating Lee Power 26-19 (scoring 1 1 shots to nil over the last five ends). However, disaster has struck as a very poor challenge has left Pegs injured (leg). Joe Richards has been contacted by Pegs who will miss the league match against Pembroke Dock and have a late fitness test or the game against Whitland. ln the meantime, Pegs has obtained permission to return to Ammanford to his own team of physios.

Rink three: John Roberts restored as skip after some tinkering by the management saw him also return to winning ways - bit of a cert these days when you play with Webby — still 100 per cent record for the one club man! Luke Rues also returned from a spell in the reserves and he was joined by Fred Broomhead for a 27-22 shot victory. The only negative side was that there were no substitutes for this game as the lack of match practice for Fred and Luke was telling as they lost all the last six ends. Good job John Baggott was on international duties with the national team, otherwise more prawn sandwiches could have been thrown around the directors' box!  Rink four: Andrew Muskett's four, with Dai Rees also making a long-awaited return from the first game of the season, had a very tight fought victory over Gareth Jones. This game was always close and a dropped count of four, not the first either ( !), saw the usual, calm calculated Tenby skip descend into panic - in fact, Joe could feel the tension all the way back in Brussels.  Still a very good win 18-17 and another winning rink. Tomorrow sees a further challenge, with Tenby playing away at Whitland. The management have promised to field their Champions League team, but with a number of injuries. they may not be able to - Pegs (leg); Cameron White (non-bowling arm); Whitehouse (bowling arm) and Muskett (hookitus).

The ND Toy & Partners, TP Hughes, and Welsh Gift Shop sponsored Tenby club continued their aim to qualify for the knock out stages of the Welsh Bowling Association Carruthers Shield Championship knowing that a win against Fishguard would secure that passage. The Sharks started well and maintained the intensity across all the rinks to record a record win at Fishguard. So, after playing their three qualifying games, winning all three, the Tenby team qualified for the later stages of the competition.

Having appeared in four out of the last five semi-finals, the Tenby club has arguably the best ever squad of players in their history. Tomorrow the club returns to League Division One action against Milford Haven (away) and will recommence the Carruthers Shield against a Cardiff club - yet to be known - on June 21.