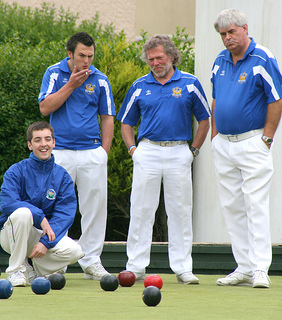 The Layton and Co Solicitors sponsored Tenby side were involved in the first of the Knock out stages of the Carruthers last Saturday. Visitors to the Sutton Street green were a Merthyr based side named Guest Memorial, who were accompanied by a busload of supporters, who were certainly up for the challenge ahead.  Conditions for the second week running unfortunately were once again very detrimental to good Bowling.Rink 1 consisted of Luke Rees, Ashley Hooper, Peter Day and Andrew Muskett. The Tenby four got off to a slow start, only scoring once on the first 6 ends, try as they might they could not get back into the contest and lost out to a disappointing 9 shot defeat.

Neil Dickinson, Joe Richards, Pat Currie and Craig Guymer were on Rink 2. This was a topsy turvy contest with Craig and his men racing into early lead only to be pegged back at the h 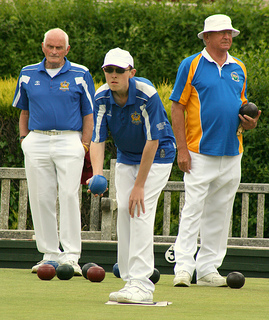 alfway stage. The opposition then pulled away, but the Tenby rink dug in and managed to claw their way back into the match ending up with an honourable draw. Top rink of the Day was Cameron White, John Baggott, Luke Guymer and Paul Diment.  The Tenby lads pushed hard throughout the match with Skip Paul leading by example, with some outstanding bowling. A 10 shot winning margin was the final outcome.

Dai Spencer, Jon Webb, Mike Jackson and John Roberts were drawn on Rink 4. This was a close battle from the off, it was all square at the halfway point, but JR and his men took the initiative in the second half running out 4 shot winners. So a closely fought 5 shot  win was the outcome of the match, with what was a somewhat lacklustre performance from the Tenby team, the overall feeling was that they had just managed to “get out of Jail” and would need to up their game for the next round. Credit must be given to Guest who treated this as their cup final and were even 47-44 up at the halfway point, but the Tenby lads just had enough to turn the game in their favour.  The next Carruthers match will be another home tie against a strong Aberystwyth side in a fortnight’s time. 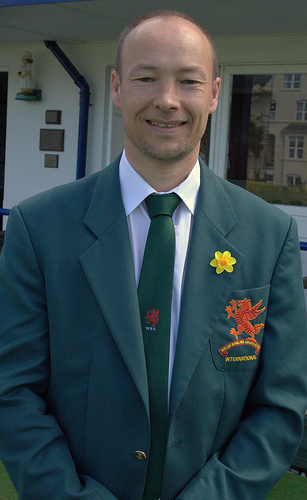 Many congratulations to John Roberts for being selected for the Welsh International team.
Full team can be found here 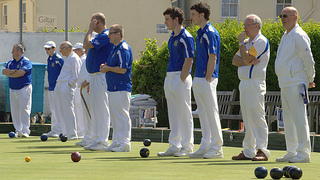 The Layton and Co Solicitors sponsored Tenby side were in action in their first Carruthers Group match last Saturday.  The visitors to Sutton Street were Milford Haven, who were arriving on the back of 2 dissapointing League defeats, so were more than eager to capture their first win of the season. Rink 1 consisted of Cameron White, John Baggott, John Webb and skip Paul Diment. The Tenby foursome raced into an early lead, with their opponents only scoring 1 shot throughout all of the first half of the contest. The Milford rink fared a little better in the second half but Paul and his men kept their concentration to end up 14 shot victors.

Luke Rees, Peter Hooper, Peter Day and Andrew Muskett were drawn on Rink 2. The Tenby rink had a very good day at the office with Peter Hooper in outstanding form. The opponents only managed to score on 5 of the 21 ends, resulting in an impressive 27 shot win for the home rink. Neil Dickinson, Ashley Hooper, Luke and Craig Guymer had to battle hard in the early stages of their contest.  9-6 down at half time, the Tenby boy’s then upped their game in the latter stages, running out 14 shot winners. John Rees, Dai Spencer, Mike Jackson and John Roberts had a very comfortable afternoon on rink 4. Racing into a 9 shot lead the home rink always had control throughout, finishing up 22 shots to the good.

Captain John Webb was delighted with the effort and application as Tenby notched up their first win of the group stages of the Carruthers, putting them top with 2 matches remaining. Tomorrow the team travel to Fishguard for their next Carruthers group match. 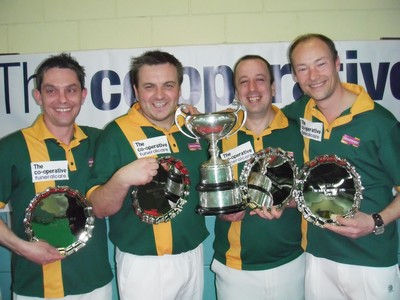 Tenby's very own John Roberts and Mike Jackson together with Alan Whitehouse of Whitland and Chris Bromham of Haverfordwest teamed up to become the Welsh Indoor Bowling Open Fours Champions. Congratulations to all.

Not to be outdone, Tenby's Cameron White and Ben Cloake together with Katie Thomas of Whitland also became Welsh Champions. This time in the Under 18 Triples. 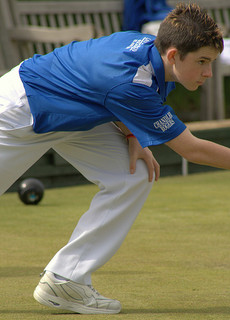 Congratulations to Ben Cloake for being selected for the Welsh under 18 indoor team.

With the entire furore now over with regard to last week’s fantastic Gold Cup week at Tenby, minds can now be cast back to the day before the Open week when Tenby travelled to Whitland for another scintillating derby encounter. Tenby had the edge over the 2007 champions during their first encounter but going away to Whitland and winning is an entirely different and more difficult prospect.  Matters weren’t help by the loss of Paul Diment, Pat Currie, John Roberts and Andrew Muskett, but then to make matters worse Luke Guymer was called in to work on the Saturday and he too had to pull out. Leaving Tenby with 2 skips and three thirds short. So Tenby called upon all the youngsters in the club and roped in novice Joe Hewitt for his first competitive game of bowls in the Tenby shirt. This however still left Tenby one player short and had it not been for Luke Rees literally dragging Joe Richards out of bed at 1.15pm the side would have been two short.

So there was the side, 15 players, against one of the strongest home sides in the County. The pre-match speech was simple, as we had nothing to prove so just go and enjoy it. However what unfolded that afternoon was pure drama. On rink 4 Craig Guymer saw skipping against Glyndwr Thomas. With Neil Dickenson newly drafted into the rink he continued with his fine performances this summer and continually put the rink in a good position, he was more than ably supported by Joe Hewitt. Joe is a natural ball player and has always excelled at any sport he’s played, be it golf, rugby, football and he did not let the team down that afternoon. Indeed Craig’s rink ended up top rink defeating Glyndwr’s rink by about 20 shots.  Such a win was needed because ion rink two John Baggott was up against it against Steve Reese. John bravely offered himself up as the sacrificial lamb, volunteering to skip the three-manned rink. With Ben Simmons and Luke Rees in support the rink started well, but on a tricky surface and faced with good bowling from Steve Reese and his men, the task proved a step to far. Furthermore the county rules state that playing a man short means you lose 25% of your total score, in the end the ‘rink’ was out-gunned but the definitely went down fighting scoring vital shots on the last two ends.

Rink 3 was skipped by Peter Day. With Rip Van Winkle playing three and the youngsters of Cameron White and Aaron Lloyd at two this was always going to be a tough battle but Peter led his troops to a fine victory against Colin Wynn. Time and against the front three had the Boarders in trouble and with some fantastic bowling by ‘Sleepy’ Joe Richards they kept their lead and won well.  This leaves team Captain and deputised skip Jon Webb on rink one. With Ben Cloake and Dai Spencer playing the games of their lives this rink was involved in a real dog-fight against Dan Jenner and Phil Wynn. There was never much in the game but towards the latter part the Whitland boys were slipping away and opened a 6 shot gap. Only for the boys in blue to pull the match back so that with one end to pay the Tenby boys were only 2 shots adrift. As it happened this rink was the last off and as all the players gathered round the edge of the green the whole game was in the balance. Having worked out the maths the game stood with Tenby being in-front by ¾ of a shot. Essentially whoever won the end won not only the rink but the whole match.  The end started badly with Ben Cloake playing probably his worst 2 woods of the day out of 42, but as was the pattern of the day and as with all good front end combinations, if the lead fails the second must cover his ar… well cover his back. That was the case here and as Dai Spencer sent his second wood jack-wards it came down the bank, pulling the jack and nestling only a few inches away.

With Dan Jenner narrowly missing twice and Gerald Hewitt not quite managing to add to the count the game was still in the balance. Webbie bowled first and just ran through the head out of the count and Phil Wynn was just short. With a bowl left Webbie changed his hand, bowled a howler and got no-where near!! So it was all on the last bowl of Phil Wynn, unsure which hand to play he opted for the bank side that he had played well all day, and as he sent his bowl down the green the line looked good and the weigh immaculate, indeed as it approached the jack the bowl was being screamed on by an expectant fans of the ‘Green Army’, but it wasn’t meant to be, the bowl only got back to the centre line and as Dai Spencer had trailed the jack away from centre his bowl still counted as shot and Tenby won a dramatic victory by 1.75 shots!!!  During the after match speeches Captain Dan of Whitland was magnanimous in defeat, stating how proud he was of the effort of his own boys following a succession of recent defeats. But there could be no prouder Captain than me! To go to Whitland with so many quality players missing, to play with one player short and one player who was a virtual novice and to still steal victory just showed what a tremendous effort the Tenby players put in, how much strength in depth there is in the club and also what desire to win there is within the team, simply a fantastic effort.  Tenby are still on course for a perfect season, but with a tricky tie away to Haverfordwest on Saturday and again with some key members missing, the team will do well to make this another well fought victory.