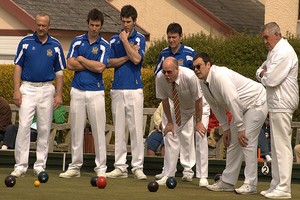 The first competitive game of the season saw current defending Pembrokeshire League Champions, Tenby, take on their local rivals which was dubbed the El Grando Classico and it was Tenby who proved they were the Galacticos.  The Tenby sponsored Layton and Company Solicitors and Chandler Rogers Estate Agents won by 29 shots and took the maximum 14 points to start their campaign.

At five ends, Tenby took control of the game and led by 17 shot.  At 10 ends, the lead had increased to 23 shots and maintained at 15 ends.  Tenby stretched further ahead by the 18th end, to 27 and finished with a 29 margin.

Rink 1 saw Simon Evans returning to Sutton Street in the whites of Saundersfoot after joining Tenby in 1991.  Simon had a successful career with Tenby, winning the Welsh Triples and last year being a member of the winning Welsh Carruthers Shield Team.  Simon formed a formidable ‘back end’ partnership with Don Poole, with the Welsh International playing in his 48th season.  Simon and Don were pitted against a strong Tenby rink, who on their last outing had routed a Ely Valley rink in the Welsh Final by 33 shots so an eagerly anticipated showdown was expected and the large number of supporters were not disappointed by both rink performances which saw the Tenby rink gain the honours by a couple of shots. 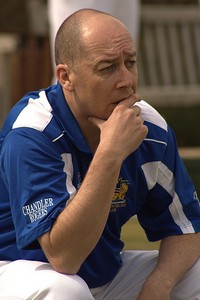 The game itself was a very close affair with both rinks taking a four, then keeping scoring opportunities to singles and doubles.  Michael Jackson, fresh from his success in the Welsh Indoor Fours was in superb form and was aided by new lead Joe Richards who had a very solid game in his new position.  Peter Day was excellent and produced the shot of the match, when on the penultimate end, with the scores level, drew shot, with a Saunderfoot Bowl only 6 inches away.

Newly crowned Welsh Indoor Triples champion, Phil Carpenter, had a convincing win against Saundersfoot Captain, Steve Dick.  The front end combination of Gerald Hewitt and Luke Guymer provided a great platform for Craig Guymer and Phil to control the match and record a 15 shot victory mainly due to taking two counts of four on the 8th and 9th ends.

Andrew Muskett’s rink were pitted against Stephen Poole who has rejoined Saundersfoot after taking a Golf Sabbatical and at one point he may have wished that he was out on the golf course as Andrew’s rink took control by the 8th end leading by nine shots to four.  However, Stephen is made on stern stuff and with the Senior County Team Manager, John Dugmore as his third, clawed their way back into the game, only to lose by a solitary shot.  Luke Rees was “player of the rink” as lead and David Spencer relished his new role as “second”.  John Roberts was his usual consistent self and found the pace of the green to his liking, despite having played in the World Indoor Bowls Championships in Scotland, returning only on Friday.

Former British Isles Champion Pat Currie took on the rink of Berwyn Dennis.  Pat once again produced a composed performance and raced into an early 16-3 lead thanks to counts of five and six by the fifth end.  A spirited comeback saw the Saundersfoot rink close within 5 by the thirteenth end, but the Tenby Rink, with Club Champion, Jonathan Webb in fine form together with excellent performances by Neil Dickinson and John Baggott saw them pull away again to ease to an eleven shot victory.

In conclusion, this was a very professional performance by the Welsh Champions, who may have felt the pressure leading into the game as Saundersfoot were being tipped as the team to challenge the Tenby side this season.  With the two teams meeting in the Carruthers Shield Group Stages in a few weeks, this league match provided both teams with psychological leverage leading into that vital match. 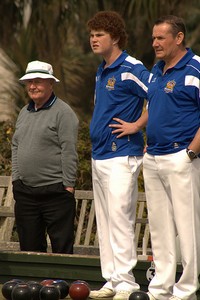 Speaking after the game, the Tenby Captain thanked Jonathan Webb of Layton and Company Solicitors and Chandler Rogers Estate Agents for providing them with new team shirts.  In addition he congratulated John Roberts for a successful indoor season, the highlight being finalist in both the Welsh Singles and the Welsh Fours; Mike Jackson for being Finalist in the Fours and Phil Carpenter for success in the Welsh Triples.

Credit must also go to our green keeper, Chris Jenkins, who once again has worked tirelessly in the closed season to ensure that the Tenby surface is once again the best in Wales.

Next week, the Welsh Champions travel to Haverfordwest in a Pembrokeshire League Division One clash looking to defeat another of their main title rivals before reverting their concentration in the defence of the Welsh Carruthers Shield where they will play Milford Haven, Saundersfoot and Neyland in the group stages.

Wednesday 21st April, saw the ladies team take to the green for their first league game of the season. This year we are being sponsored by The Fourcroft Hotel. The Fourcroft have kindly provided new blouses of white and turquoise, so there will be no mistaking the team from now on. The game was played in sunshine but a little chilly on times, but this didn't stop the fun and the good natured game. The results from each rink was very encouraging with Captain Lynn hoping this will be a good omen for future games. Our next game will be home to Milford, on Monday 26th April at 2.00p.m.

There was a very disappointing showing from the Tenby players (writes E.M.). Only nine first team players showed interest in playing. I hope this is not the trend for the forthcoming season. 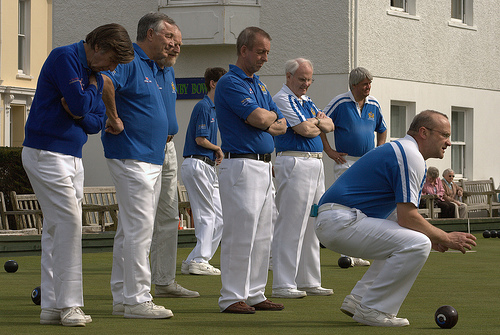 Two of the Tenby players reached the final of the Welsh indoor fours. John Roberts and Mike Jackson, partnered by Chris Bronham and Alan Whitehouse, losing narrowly by one shot to J. Tomlinson’s very strong Iswlyn side. The club would like to congratulate the two Tenby players.

After the intense rivalry of Saturday's game against Tenby , another fine spring day greeted the arrival of the Pembroke Dock Pater team for our longstanding friendly fixture. The match is always played in good spirit and Sunday's game was no exception. The green was in superb condition ensuring a wonderful playing surface.

Lee's rink of Ken Lloyd, Ken Williams and John Hubbard quickly mastered the trickery of rink three. After a tight first half, the tea and biscuits provided the necessary lift  for the team to pull away and finish comfortable winners by 29 shots to 17.

On rink four new skip Clive Webb quickly found his feet and with fine support from Eamonn, Jim and Mike,  only conceded on seven of the twenty one ends to run out eventual winners by 26 shots to 9.

Rink five provided the closest match, Tony's rink of Ben , Stuart and Ashley failing to score in the first eight ends and finding themselves 13 shots to 1 down after nine ends. A spirited comeback after tea fell just short with the Pater rink easing to a 20 shots to 17 victory.

The rarely used rink six proved a good hunting ground for Gwyn's rink of Dai, Harry and Tony. Picking up a seven on the first end , they never looked back and finished with a comprehensive victory of 37 shots to 15.

Overall an excellent result for the Five Arches team and with a couple more weeks to go until our first league game , this result shows we're well on the way to mounting a serious challenge for this years Division Two championship race.