After a three week gap, the Five Arches team travelled to Milford for their second match in the Pembrokeshire League Division 1. After winning in the previous game against Pembroke Dock, hopes were high that this run would continue however the team were brought back down to Earth by some fine play by the Milford team. Rink one saw Five Arches new recruits Jon Webb and Beano paired with Jon Hubbard and Ken Lloyd. They were drawn against a strong Milford rink skipped by Dave Buchanan.  The Milford rink made the early running and were leading by 9 shots to 2 after 7 ends, the Five Arches rink then fought back to be within 1 shot after 14 ends, however a strong finish by the home team let them ease to a 21 shots 14 victory.

Ashley’s rink of Viv, Dai and James started well, 8 shots to 4 up after 6 ends however a run of 13 unanswered shots for the Milford rink soon put paid to that early lead. The Five Arches rink dug in and fought back to get within 3 shots by the 17th end , however once again a strong finish by the Milford quartet ensured a comfortable win by 26 shots to 15. Simon and his rink of Roger, Ben and Steve trailed by only 4 shots at tea but again the Milford rink had a good second half to run out comfortable winners by 24 shots to 13. Finally on rink 4 , Gerald's rink of John, Mike and Neil provided some resistance, two shots ahead at tea, they finally edged a one shot victory after a closely fought second half. Overall a disappointing performance but many congratulations to a good Milford team. Next up home to Haverfordwest. 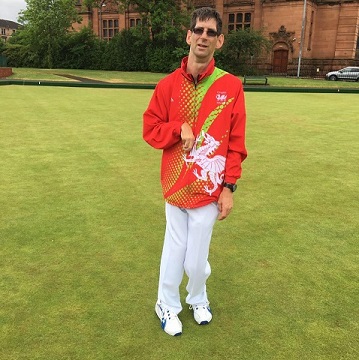 Many congratulations to Jon Hubbard for representing Wales at the recent Para Bowls Home Internationals in Glasgow. 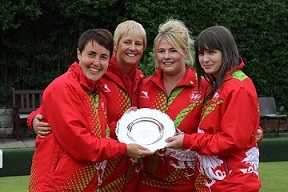 Many congratulations to Ysie White for being selected to represent Wales at the recent international series in Scotland. Ysie is pictured with international colleagues , Ceris Hewlings, Steph Amos and Gemma Amos from Saundersfoot BC.

Thursday saw the first league game against Saundersfoot. Tenby having previously beaten them in the Carruthers Shield a few weeks previously.  Tenby continued to experiment with their team leading into the Carruthers game against Prestiegne and were grateful to a great finish once again to secure victory. Rink 1:  John Roberts returned to the rink of Peregrine with Luke Rees and Liam Price.  They played against Saundersfoot skip, Steve Dick.  A solid start after five ends, the Tenby team led 7-3 however a run of six consecutive losing ends meant they trailed 7-15 after 11 ends.  Saundersfoot continued their dominance to lead 9-20 at the sixteen end mark, but then the Tenby four rallied to win the last five ends 8-0 to close with a defeat 17-20.

Rink 2:  The unbeatable’s continued their unbelievable run by beaten the Stephen Poole rink by 26-15.   Craig and Luke together with Chris and Mike restricted their opponents to only 9 scoring ends, and when that is only counts of singles and doubles, you are in trouble against this rink who respond with threes and fives. Rink 3:  Ben Cloake, Cameron White, Joe Richards and Ryan Thomas played well against the Merv Dennis rink.  Taking a five on rink one set up things nicely but at five ends, they only led by one shot.  At fifteen ends they fell behind 14-18 but they tied things up leading into the last end (19-19).  Holding match, a huge slice of luck by the Saundersfoot skip took a double.

Rink 4:  Andrew Muskett played with Paul Diment for the first time in many a year.  11 club championships between them 6 welsh titles and a British Title, they were joined by Peter Day, a two-time County Singles Champion with 2 welsh titles to his name and himself a British Champion.  Aaron Lloyd, with two Welsh titles to his name.  They played Berwyn Dennis, in my opinion the most accomplished Saundersfoot skip – himself a Welsh International.  The Tenby rink fell behind 3-8 at seven ends with Louis Price in great form.  At fifteen ends that lead was 9-16 and all looked good for a Saundersfoot win – not only on the rink, but overall.  However, Muskett has other ideas, and like Rink 1, only lost one of the remaining ends to sneak a win 18-17. In conclusion, another close game and I must be honest in saying that I though the unbeaten run had come to an end.  However, credit again to the Tenby team who certainly know and have proved how to close out games.

The first of two league games in one week started a few Tuesday’s ago (14th June) for the Tenby Sharks.  The last time these two teams met resulted in a slender 2 shot victory at Tenby’s Sutton Street HQ where they haven’t lost in the league since 2014 – at the hands of Haverfordwest .  The Selectors decided on a change of team and positions this game and on Rink 1, Kieran Peregrine, winner of 4 silver bowl titles was joined by Paul Diment, with 2 silver bowls to his name.  They were joined by Liam Price, current holder of the Five Arches Bowl and Luke Rees, former Tenby Club Champion.  Their opponents comprised former Welsh Indoor International and Tenby player, Alan Whitehouse.  The Tenby rink raced off to a 7-1 lead, but then Alan and his third, Bill Jones, started playing and boy did they play, outscoring the ‘Pegs’ rink 11-1 to take the lead.  A fine finish by Tenby reduced the deficit, but still a loss of 16-20.

Next door, the galacticos continued their unbeaten run.  In fact, I cannot remember the last time they lost.  At seven ends, the three internationals of Craig, Luke and Chris joined by Welsh fours winner Mike Jackson, were 6-5 up.  Then, as is usual, a run of winning ends resulted in them extending their lead by fourteen shots over the course of six ends.   Another strong finish resulted in a 28-14 lead.  A change in personnel saw John Roberts switch from Peregrines rink to Andrew’s.  Andrew was joined by Ben Cloake and Peter Day.  The change did not seem to work as previously unbeaten Muskett, went down by 9 shots to County Team Manager, PDS Jenkins.

Ryan Thomas continued to skip and with Joe Richards, Peter Hooper and Cameron White continued his form – promptly dropping a five shot count on the first end.  However, the likeable and talented Rhino did not let his head drop and rallied his troops.  A couple of counts of ‘five’ and ‘fours’ saw them win their rink 24-17.  In conclusion, a great win by the Tenby team.  The selectors were brave enough to change formations leading up to the big game on Saturday against Prestiegne and although they [the changes] did not work as they would have liked, another game beckons on Thursday against Saundersfoot to try new ideas.  However, it should also be remembered that Tenby still beat a very very good Haverfordwest team on their own patch and they have taken another step in retaining their league title.